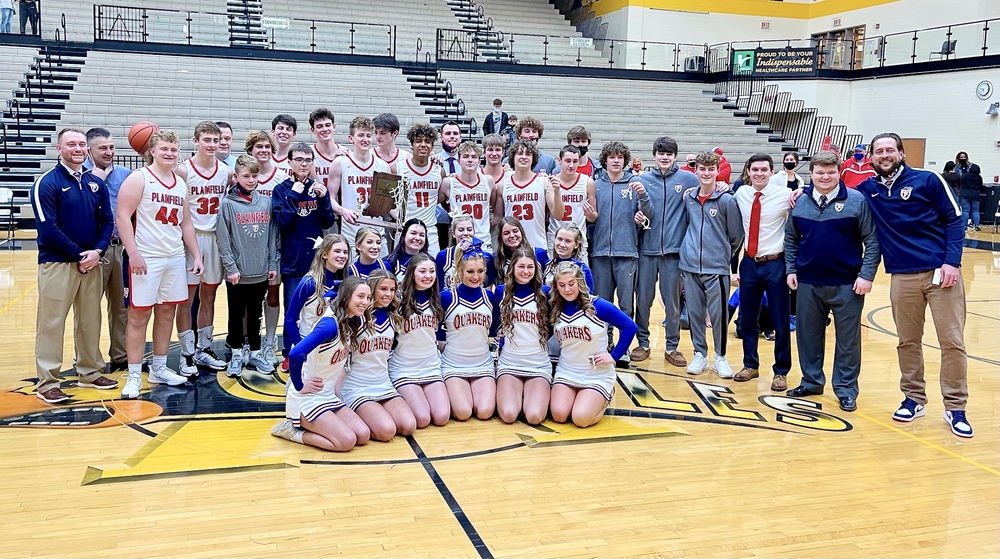 Something Special: A Basketball Team and Its Fans

It's a special time of year in Indiana. Just this week marked the 100th anniversary of the gym where many scenes from the movie "Hoosiers" were filmed (Knightstown High School), and 35 years since the movie's release. It also marks the second round of the state boys basketball tournament, as Indiana plays host to 169 basketball games in 33 days.

Basketball fever may be a little bit higher this year. It was during the 2020 boys basketball sectionals that we first really began to understand the scope of COVID-19, and in fact, the last few rounds of the state tourney were canceled.

Fast forward to the beginning of this year’s boys basketball season, and the scenario was still pretty grim, but in Plainfield and many surrounding communities, winter athletes were able to compete. And the Red Pride boys basketball team is still playing, heading to the Southport Regional on Saturday with a 23-2 record. Yes, tickets are still available via this link: https://southportcardinals.com/2021bbbregional3/.

As the final buzzer went off, Quakers on the court and in the stands celebrated; photo credit: Matt Edwards, Edwards Photography & Arts

In Indiana, we still take basketball pretty seriously. While many people lament the loss of packed gyms and fierce rivalries with neighboring schools, Plainfield has typically had a loyal following that includes fans of all ages. From the men who can be found (in normal times), game after game, in the front rows of the bleachers, to the young boys who earned the honor of being named “the team’s biggest fans” during this year’s sectional run, it has been great to see the support and enthusiasm for this team.

At Plainfield High School, school spirit has been on a rapid incline over the last few years, and the students were loud and proud for the games at Avon last week. With a theme for each game, never taking a seat and showing knowledge and passion for the sport and their classmates, they prove wrong those who think no one cares about high school basketball any longer.

The student section theme for the second game of the sectionals was Red Out; photo credit: Matt Edwards, Edwards Photography & Arts

After the game, the players told these future players they were their biggest fans and helped them get the win over Brownsburg; photo credit: Shelley Moyers

PHS has fielded some outstanding athletes through the years, and many teams have put up great records. But people have quietly been talking about this year’s varsity team all season, saying they were special, different. They’ve said they care more about the team than themselves, that their focus is on supporting one another.

These players are successful students, they have other interests and many play other sports. They are just a good group of people, so watching these young Quakers look up to them with wide eyes is truly a feel-good moment.

Those young fans? Many of their moms, dads, aunts and uncles, grandmas and grandpas donned the Quaker jersey a few years ago. Even great-grandpas. We can’t wait to see them playing on the varsity court in a few years, and we know their fans and families will cheer them on just as they're doing now.

The  Quakers take the court on Saturday at 12:30, for Game Two of the Southport Regional against the 17-6 Marauders of Mt. Vernon. Tickets for the evening’s championship game will go on sale 30 minutes after the buzzer ends Game Two.