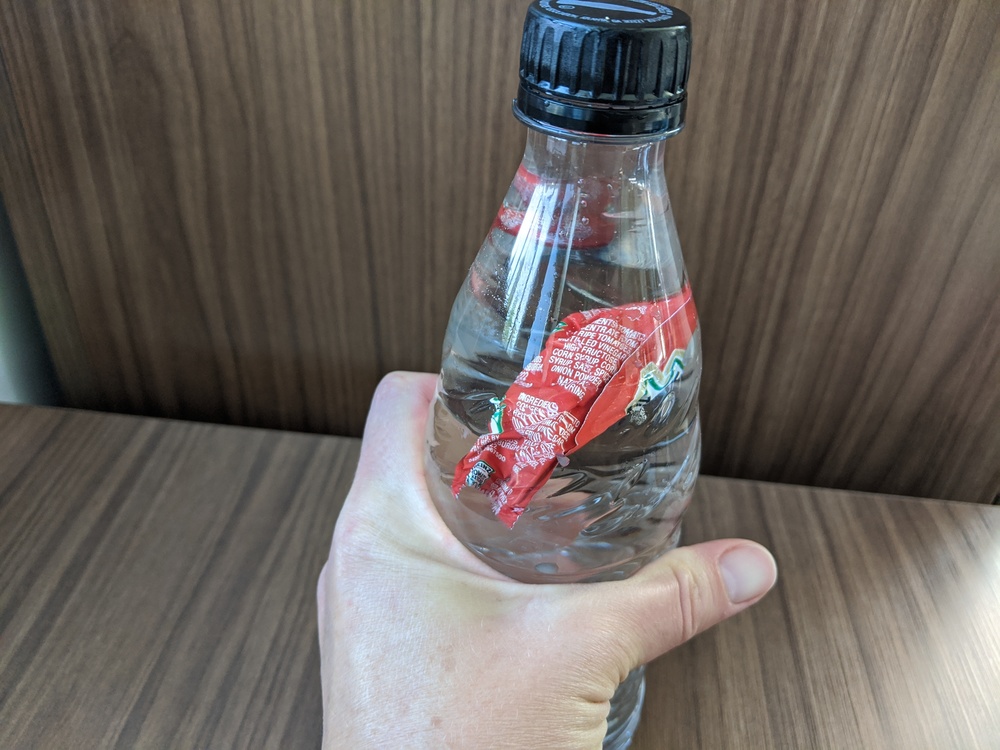 Check out Imagination Igniter #6 -- create a Cartesian Diver and learn about density.

Please sure to share your pictures or videos with us

and a cherry tomato.

Two of these will float and one will sink. Which one do you think will sink?  Which two will float?  And why?!?

Here they are in the water.  Study the picture for a few moments.  Can you see that the strawberry and the ketchup packet are floating above the bottom of the bowl, but the tomato is sitting right on the bottom?

Let’s look from a different angle.  The ketchup packet and the strawberry float.  The tomato sinks.

So, why? How does this work?

Maybe each of these objects just follows SELF-DISCIPLINE.  That’s one of our E-Skills.

To be self-disciplined means that you use self-control to follow rules without someone having to tell you what to do.

I know that kids and adults can and should use self-discipline.  But I don’t think it applies to the ketchup packet, strawberry or cherry tomato.

These objects float or sink because of density.

Density compares the mass to the volume of an object.

Let’s think about the density of cheese compared to a marshmallow.  In this picture, they both have about the same volume or size.  But which one do you think would be more massive or heavier?

We can compare the marshmallow and cheese by thinking about the molecules inside that make them marshmallow or cheese.

Marshmallows are really light for their size because most of a marshmallow is air trapped in between marshmallow molecules.

The cheese molecules are packed closer together with less air in between.

So in terms of density, the cheese is more dense than the marshmallow.

What do you think would happen if we put the cheese and marshmallow in water?!?

Which one is floating in this model -- cheese or marshmallow?

The water has density too.  See the water molecules are a little bit closer than the marshmallow molecules, but much farther apart than the cheese molecules.

So that’s what it means to float -- the object is less dense than the liquid it is in.

So let’s ask this again:  which of these has a density that is MORE or LESS than water?

The ketchup packet and strawberry have a density less than water so they float.  The tomato’s density is greater than water so it sinks.

So we know that a ketchup packet floats.  But did you know we can also make it sink?!

For Imagination Igniter #6, a Cartesian Diver, you’ll need an empty plastic bottle with a lid, a ketchup packet, and water.

Put a ketchup packet into a plastic bottle that is filled with water.  Make sure the water goes all the way to the top.

Put the lid on tightly.

And squeeze and then release.

And squeeze and then release.

How does this work?!

The ketchup packet has a pocket of air inside.  When you squeeze the bottle the air pocket gets smaller because the water squeezes it.

That means its volume gets smaller.

Which means its density changes!

Which means it stops floating and starts sinking!

I wonder.  Would this work with different kinds of packets -- like soy sauce or mustard?  What about with a bigger plastic bottle?  What happens it the water doesn’t go all the way to the top?

Give it a try and share your results with us -- TheImaginaitonLab@plainfield.k12.in.us

Or on social media