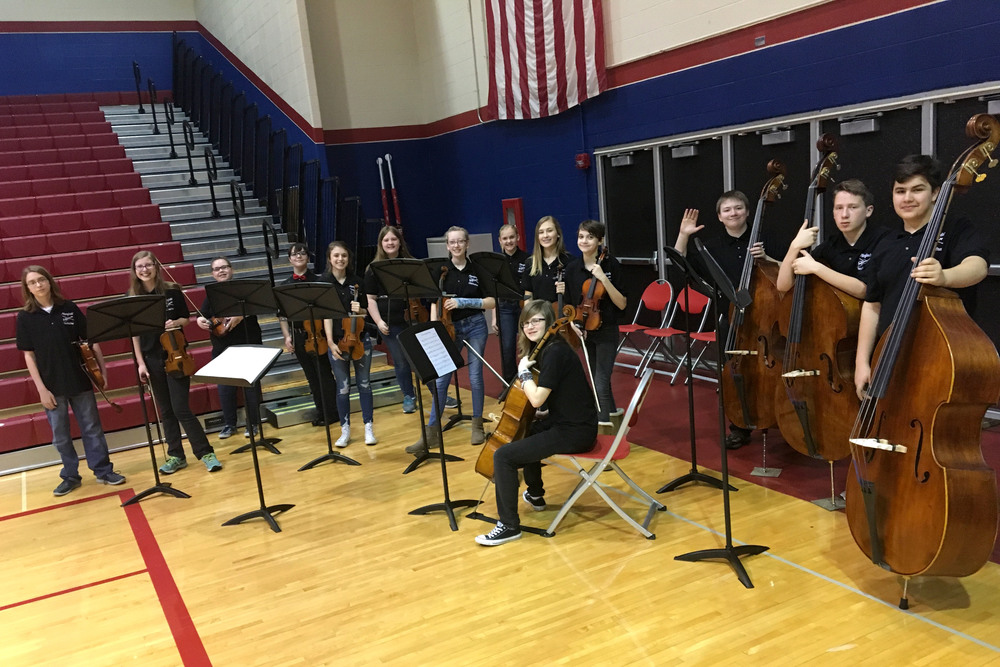 Plainfield has a rich history of outstanding fine and performing arts programs, and judging by the data, this year is no different.

At Plainfield Community Middle School, the Advanced Fine Arts (AFA) class presented "The Sound of Music" last month to not one, not two, but three sold-out crowds. These 7th and 8th grade students have worked since January to bring the Rogers & Hammerstein classic to life, and they were wildly successful.

In the Band department, the 6th, 7th and 8th grade bands each received a Gold rating with Distinction at the ISSMA Organizational Contest earlier this month.

Students also brought home a total of 25 medals from the Instrumental Solo/Ensemble contest, with 23 Gold and 2 Silver medalists. Mallory Chestnut (7th grade) earned a perfect score for her performance on the flute.

It seems safe to say that most people didn't expect a lot of gold from the first-year Orchestra program, given that so many students had never picked up a string instrument before last summer. So the beautiful performances and the many successes they've enjoyed this year should be even more special for everyone involved.

In January, 11 orchestra students from the middle and high school participated in the ISSMA Solo & Ensemble contest, and all eleven earned a gold rating! In late February, PHS senior violinist Anna Logan took a solo to the state Solo & Ensemble competition where she not only earned another gold rating, but this time, with distinction!

The 6th grade, and combined 7th & 8th grade orchestras, performed for the first time this year in the ISSMA Contest, where both groups earned gold ratings, and the 6th grade's included the "with distinction" notation. Not to leave out the PHS Orchestra, their first ISSMA contest occurs on April 8th.

Belles et Beaux came in 2nd at the state level this year, while also earning Best Vocals and Best Instrumental Group. Earlier this year, as part of Indiana's year-long Bicentennial events, the co-ed show choir was invited to perform for Statehood Day and the Birthday Celebration.

During the first semester, PHS Performing Arts students, including many from the show choirs plus 40 elementary students, sold out three performances of the musical "Shrek."

Also at PHS, the Winter Guard program has grown from 12 to 26 students in a matter of months. Many of these performers are new to the program, and yet, under first-year director Jose Rodriguez they advanced to Semi-State. And with the growth of the high school program PCMS has added a color guard club.

The PHS Drumline is another group that fills the often-dreary winter months with exciting music and precise, creative movements. The group continues to grow and their performances are not to be missed!

The PHS Concert Bands recently performed their first Prism Concert, meaning every member of the band performed in a small chamber ensemble. Throughout the concert, 36 pieces of music were performed, including the winter guard and percussion ensembles!

After hours upon hours of work in the spring, summer and fall for marching season, band members transition to concert and chamber performances during the winter months. And in January, the Red Pride Marching Band was honored to be asked to perform the National Anthem for (then) Vice President-Elect Pence and his family when they returned to Indiana following the election.

And the high school Pep Band brings energy, school spirit and just plain fun to basketball games. Members of the Pep Band participate in this outside of their other music commitments, and their efforts are always appreciated.

Students who participate in Fine and Performing Arts represent just a portion of our middle and high school scholars, but like those in robotics and We The People and Academic Super Bowl, like those on all the different athletic teams, and those who participate in so many other extracurricular activities, their dedication, teamwork, discipline and commitment to a shared goal serves them well, today, and into their futures.